What is the Service Life of Parylene?

Under ambient conditions (room temperature, in air) Parylene is a lifetime conformal coating. The exposure to environmental stressors like temperature, oxygen, UV-light and chemicals can degrade the lifetime especially when two or more are existent at the same time.

According to Figure 1 Parylene D has the longest stability compared to C and C has a better lifetime compared N. It must be kept in mind that, once these films are exposed to light the useful lifetime decreases further due to oxidation and the molecular chains absorb oxygen and form carbonyl chains. Researchers suggest that quantification of oxidation products is possible and the consumption of oxygen leads to an increase in the spectrum fingerprint of carbonyl peak (1700cm-1 for Parylene N and 1695cm-1 for Parylene C). The rate of oxidation decreases in time probably due to the decrease in the amount of available polymer chains available for oxidation. The degradation becomes inevitable under these conditions. The structure can not serve as a protective layer anymore. As films get oxidized yellowing and embrittlement was observed by researchers and they reported that the onset of yellowing occurred in the following order: Parylene N, Parylene C [1].

Parylene F can withstand oxidation better than the latter under UV exposure and higher temperatures. Finally, Parylene AF-4’s melting point is greater than 500° C. It survives at higher temperatures/UV-exposure better than other parylenes for long durations because it possesses CF2 units, situated between its polymer-chain rings. 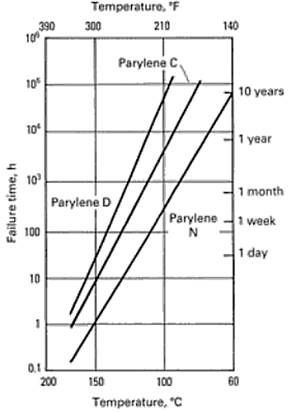 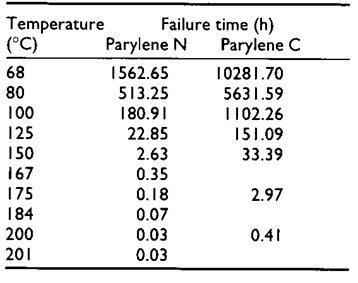 The effect of UV exposure and Lifetime:

Grattan and Bilz later carried out another study on Parylene C and N to find out about the effect of UV light exposure on the oxidation. They set 0.061 M carbonyl concentration as the criterion for film failure and find out that under UV exposure of 2500 lux Parylene N can withstand 2784 hours (0.31 years) and Parylene C can withstand 20,538 hours (2.34 years) at room temperature (As shown in Figure 2) [3]. 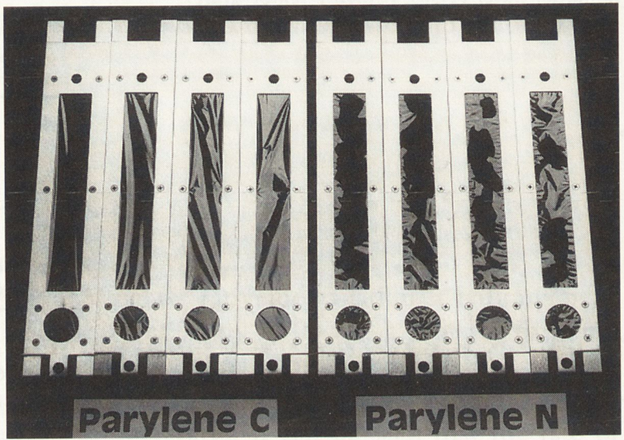 The huge difference between the failure time between UV exposed films and films that are not exposed gives an important insight about the proper service conditions of Parylene C and N. The chemical structure of Parylene D, C, N, AF4 defines the degradation due to UV exposure. Parylene N is an unsubstituted hydrocarbon molecule, Parylene C has one added chlorine group per repeat unit, Parylene D has two added chlorine groups per repeat unit. In contrast, Parylene AF4 replaces the hydrogen atoms on the chemical’s benzene ring with fluorine atoms, significantly enhancing its UV-stability. To read more about Parylene AF4 you can visit the our blog.

It is important to note that the mechanical properties of Parylene can be improved using thermal treatment. This also improves the lifetime [4].

To learn more about parylene, download our whitepaper now: