Parylene films are highly employed in different applications because they are chemically inert, transparent in the visible range of the solar spectrum, offer high dielectric strength and insulation resistance, low moisture vapor transmission and gas permeability rates [1]. They can also be deposited as void-free layers on complex geometries in deep, narrow crevices.

Refractive Index: Refractive index is measure of the bending (deflection) of a ray of light when passing from one medium into another. The refractive index (n) is calculated by dividing the velocity of light in vacuum (c) to that of the medium of interest (v). 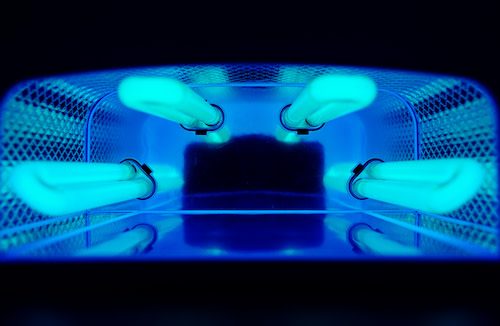 The transmittance and absorbance data of Parylene C and N are illustrated in the Figure [2]. The high transmittance of the polymers in the visible region make them eligible for use in optical applications. Also, the thickness uniformity of the thin films do not affect Parylene C’s use as a conformal layer because of the broad emission spectra of the OLEDs.

It must be noted that the use of Parylene over the glass transition temperature would induce crystallization. Therefore, when the parylene intended for waveguide use must not be exposed to temperatures above glass transition temperature to prevent crystallization. Crystallinity induces scattering which is not deserved in waveguide applications. However, OLEDs would benefit from higher crystallinity due to an increased transmission after annealing.

Aplication areas of Parylene C as an optical conformal layer:

Parylene type C or poly(chloro-p -xylene) is highly researched and used in the electronics industry in the manufacturing of capacitors, semiconductor passivation, as gate dielectric and as a conformal coating of PCB’s.

Applications of Parylene C in optical components such as antireflective coatings [3], optical waveguides[1], beam splitters [4], LED encapsulation due to its transparency (Transmission Visible = 90%) are also available[5]. The high visible or near infrared transmission (∼90-95%) of the films are suitable for LED/OLED encapsulation applications [1], [5]. The encapsulated LEDs haves been reported to show an improved lifetime of approximately 30% besides the visual appearance of parylene layers are attractive to the customers.

Also, parylene pellicles for use in beam splitters are available. Pellicles made of organic components available to split beams, polarize light, and reflect images with negligible lateral shift effects [4]. And they offer advantages over traditional pellicles: minimize or eliminate ghost images, refractive errors, energy absorption, and spherical and chromatic aberrations.

In summary, Parylene C is an excellent conformal coating as an encapsulant allowing for the improvements in the lifetimes of devices by protecting them from service conditions while not interfering with the optical properties of the devices in the visible region.

Discover more about parylene and UV light by downloading our whitepaper now: