Are Parylene Noodles a Defect?

Unlike liquid conformal coatings joined to substrate surfaces by wet application methods, polymeric parylene (XY) uses a unique chemical vapor deposition (CVD) process to assure adherence.  There is no intermediate liquid phase.  Rather, cross-link polymerization of powdered raw XY-dimer converts the solid to a vapor at the molecular level, polymerizing XY directly as a transparent film on assembly surfaces.

Applied in a gaseous state, XY penetrates deep within substrate surfaces, providing an authentically conformal protective covering.  In many ways, parylene coatings are superior to those provided by wet materials like acrylic, epoxy, silicone or urethane, for a wider variety of products and purposes.  Micro-thin film performance makes parylene especially useful for coating printed circuit boards (PCBs) and in microelectromechanical systems (MEMs)/nano technologies.

The XY deposition process assures neither heat nor cooling is needed for coating adherence.  The circuit board neither expands nor shrinks, reducing coating-stress.  Depositing XY as a dry vapor helps the coated items endure minimal changes during the application process, eliminating another major risk factor of coating defect.

As a polymer, parylene begins as a monomer-based linear chain fused covalently.  The ongoing chain entanglements characterizing parylene morphology stimulate a degree of viscoelastic behavior.  Viewed microscopically under normal conditions, they resemble noodles, sometimes elongated but neither precisely straight nor clustered together; often compared to a bundle of spaghetti noodles, they are held together by a few chemical cross-links.  More precisely, 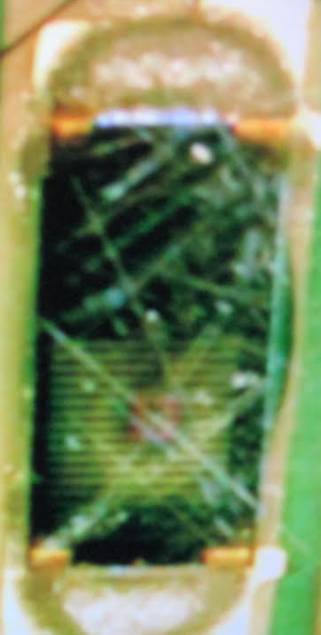 In this basic form, which encompasses parylene morphology, noodles are NOT a defect, but a normal and characteristic part of the polymer’s physical structure.  Increasing their density across the strands provides shape and strength, limiting their ability to pull away from each other, while increasing their functional and load-bearing uses.  These capacities help XY polymers achieve architectural/performance networks necessary for conformal coating purposes.

Despite its general superiority as a conformal coating, parylene application and use can suffer defects.  While common XY defects can often be identified, planned for and mitigated through proper procedures, they still occur.  Inadequate application or deposition onto a surface unprepared for adhesion can compromise XY function.

Defective noodling is the result of deformation mechanisms developing on the surfaces and interfaces of parylene coated systems.  These factors can cause loss of the parylene film’s surface pattern-effectiveness, disrupting the structural integrity of the coating’s typically reliable noodle-like entanglement.  The surface is then characterized by highly disordered structural configuration, resembling a plate of noodles winding chaotically around each other, interfering with parylene’s usual uniform, pinhole-free surfaces.  Disruption of the coating’s performance integrity can lead to both current leakage and voltage breakdown.

If inappropriately cleaned before application, or inadequately deposited, liquids or other substances can penetrate both at the parylene-substrate interface and through the polymer layer, stimulating an environment of disrupted noodle development.  Film instabilities can also occur on parylene surfaces when temperatures exceed the polymer’s standard glass transition temperatures (Tg).  Basic outcomes include sequential disruption of hierarchical coating formation, a condition that can be generated despite the protection usually afforded by XY’s reliable CVD application method.  Poor adhesion and residual stress can also lead to bending, cracking, peeling and noodling of parylene conformal films.

Parylene conformal coating defects can be caused by a range of factors. However,

Thus, noodles, a basic element of parylene morphology, can themselves be transformed from a tasty dish of conformal coating to one that may need to be scrapped or redone.

Not always immediately apparent, disordered adhesion will eventually compromise the coating and, ultimately, the end-product, thus neutralizing parylene’s protective benefits.  As an integral structural XY-component, you can’t avoid the presence of parylene noodles, but you can control them.

To learn more about different inspection criteria for parylene, download our whitepaper now: