The Importance of Cleanliness Testing

The Need for Cleanliness Testing

Successful conformal coating relies on ensuring the surface of the printed circuit board (PCB) is thoroughly clean prior to coating application.  PCB contamination can cause critical degradation of coatings’ dielectric strength and insulation resistance.  Cleanliness testing monitors the PCB’s condition, assuring it is sufficiently free of contaminants to accept coating.

Cleaning before coating should be standard practice.  Ionic residues are a class of PCB contaminant consisting primarily of flux activators, plating chemistries, surfactants and worker-perspiration.  They contain atoms or molecules conductive in solution.  Disassociation of ionic residues into either negatively or positively charged particles increases:

Often by-products of manufacturing processes, ionic residue/contamination has a higher failure rate than its counterpart, nonionic contamination.  Ionic cleanliness testing is recommended to assure to detect ionic contaminants, so they can be eliminated before coating is initiated.

In contrast, nonionic residues are not conductive; usually organic, they consist of materials like grease, hand lotion, oil, resin and silicone.  Generally effective as dielectrics, nonionic contaminants don’t short-out PCBs.  However, their insulative properties can generate unwanted assembly impedance, as well as: 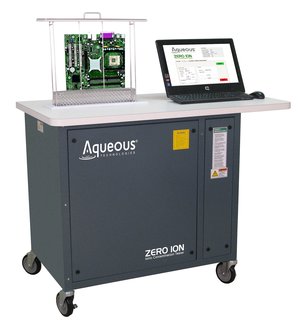 Visual inspection at magnification of 10-15X is the simplest method of detecting the presence of both ionic/nonionic residue, but provides no reliable quantitative data regarding contaminant type.

Separate tests are used to ascertain the presence of ionic and non-ionic contaminants.  A simple quick-and-dirty test can be used in some cases to determine aa PCB’s cleanliness.  Differences between ionic/non-ionic residue is apparent even in these situations:

The resistivity of solvent extract (ROSE) method is used to test for the presence of ionic residue on substrates.  ROSE first establishes a solution’s conductivity level in solution.  Samples are immersed in a solution of deionized water and isopropanol alcohol (IPA) at room temperature for 10 minutes or more, according to the guidelines of IPC-TM-650, method 2.3.25.  If the board is still contaminated with ionic compounds, resistivity decreases; in contrast, conductivity increases.  The objective is meeting an ionic cleanliness requirement of 1.56 microgram (µg) of sodium chloride (NaCl) equivalence (º) per square centimeter (cm2) of extracted surface, according to requirements of MIL-STD-2000 and IPC-J-STD-001.

These methods require costly, high-maintenance, time-consuming technologies that discourage common use.  Solvents and surfactants safely remove organic and other nonionic contaminants from PCBs.

Pre-washing of PCBs prior to applying conformal films is a fundamental function of the coating process.  Circuits cleaned prior to conformal coating eliminate the presence of PCB-residues, improving ongoing performance.

Prior to coating, PCBs are subjected to a multiplicity of handling/production processes which leave residues in their wake.  Ionic or non-ionic in nature, they can affect every assembly component/surface, or just selected areas.  Effected areas can rapidly experience increased reactivity after the PCB is in use, especially in a humid or more aggressive operational environment.

To learn more about conformal coating, download our whitepaper now: